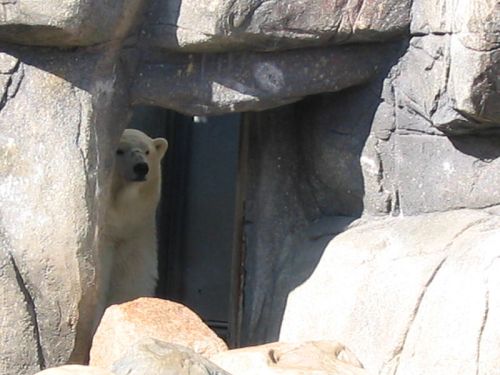 Originally published on July 25, 2014, at ForceChange.com

Goal: Convince the people of Argentina to liberate their last captive polar bear from extreme heat and poor living conditions

Arturo, Argentina’s last captive polar bear, suffers each day in Mendoza Zoo exposed to the excruciating heat of the sun. But zoo officials refuse to transfer Arturo to a colder climate or even provide Arturo with proper medical treatment. The government of Argentina needs to put an end to this animal cruelty and move Arturo from Mendoza Zoo before his health deteriorates any further.

Forced to live in a concrete cell in harsh temperatures, Arturo the polar bear languishes in the sun all day for the entertainment of zoo patrons. His current climate is anathema to his original polar environment. Arturo’s body was built to survive in snow, not sun-baked concrete.

If Argentina refuses to release their final captive polar bear, then they should at least provide the necessary medical records to transfer him to an animal sanctuary and improve his living conditions. Arturo deserves more respect than a mistreated sideshow freak. We need to give this polar bear immediate medical treatment before it is too late.

By signing the petition below you will help urge the President of Argentina, Cristina Fernandez de Kirchner, to provide the necessary medical treatment and improved living conditions for the last remaining captive polar bear.

The suffering of Arturo, your country’s last captive polar bear, must come to an end. Locked within a concrete cell for the remainder of his life, his body endures extreme heat that is rapidly deteriorating his health. Since officials at the Mendoza Zoo refuse to provide him with better living conditions, I urge you to release Arturo from the brutal conditions of his captivity.

Prove to the world that Argentina refuses to tolerate animal cruelty. Prevent Arturo’s slow, excruciating death by releasing him back into the wild or at least transferring him to an animal sanctuary equipped to provide him with a colder climate and proper medical treatment. Because Mendoza Zoo will not release his medical records for attaining a transfer permit, I need you to step up and take a stand for animal rights.

In the eyes of the world, Mendoza Zoo’s mistreatment of Arturo is both intolerable and reprehensible. Show us that Argentina does not condone such animal abuse by liberating your last captive polar bear from such inhumane treatment. Arturo’s only crime was being born a polar bear. Please put an end to his punishment by rescuing him from the Mendoza Zoo.