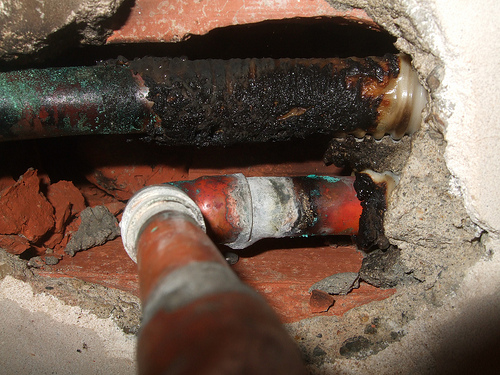 Originally published on August 2, 2014, at ForceChange.com

Goal: Repair the U.S. water infrastructure before the rapidly deteriorating pipes cause a catastrophe

According to the Environmental Protection Agency, approximately 240,000 water main breaks occur each year across the United States. With our pipes growing too old and not being replaced, broken water mains have been responsible for numerous mudslides, floods, and droughts. Engineers believe the number of broken water mains will only increase with each year until we improve our rapidly deteriorating system.

With most of California’s reservoirs less than half full, the state cannot afford to lose any more water. The increasing risk of broken water mains places states like California on the precarious edge of a drought. Failing pipes have caused mudslides in California, sinkholes in Florida, and multiple floods across the U.S.

Wooden and cast-iron pipes dating back to the 19th century still make up the infrastructure of our nation’s eroding water system. Many of these pipes are being used well past their expiration date and need to be replaced before they burst, spilling millions of gallons of fresh water. Instead of waiting for these water mains to break, we should be getting ahead of the problem before it becomes too large to fix.

By signing the petition below you will help urge the U.S. Senate to take action and repair our failing water system before it is too late.

Our water system can no longer sustain itself without repairing its collapsing infrastructure. The EPA has reported that nearly a quarter of a million water mains break each year in the U.S., and that number is rapidly increasing. We cannot simply wait until the pipes burst before we finally decide to take action.

With California’s diminishing fresh water reservoirs, many people can no longer afford to lose a single drop of water. On the brink of a drought with rising temperatures, states like California are approaching catastrophe. Sinkholes, mudslides, and floods will pale in comparison to statewide droughts caused by broken water mains.

We are still using pipes that were installed during the 1800s and were not meant to survive this long. If you cannot provide fresh water to your constituents, how long do you think you will remain in office? Our engineers estimate that the entire infrastructure is due to collapse unless we take proactive steps to secure our future. If you refuse to help yourself, at least provide fresh water for your children.