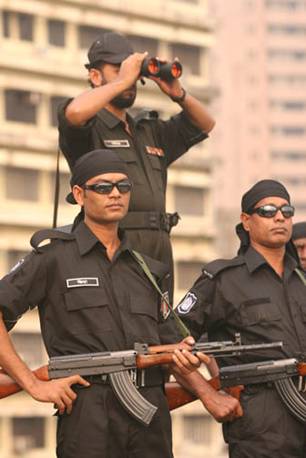 Originally published on August 19, 2014, at ForceChange.com

The police and pro-government groups are attacking union leaders participating in a hunger strike in Bangladesh. Human rights activists attempting to give medical supplies to the striking workers have been beaten and arrested. The government of Bangladesh needs to investigate these attacks and charge the guilty officers of excessive force.

At least 1,200 workers have been on a hunger strike since July 28, 2014. The workers are protesting in Hossain Market and demanding three months of unpaid wages. Human rights activists and doctors visit the workers, providing medical treatment and saline drips.

On August 6, police and members of a pro-government workers’ union barricaded the market to prevent doctors and human rights defenders from helping the striking workers. Targeting activists and union leaders, the police and pro-government groups savagely beat several human rights defenders and arrested them. Instead of engaging in retaliatory violence, the workers continued their hunger strike.

The police returned the next day, firing rubber bullets and tear gas into the crowd. Instead of supporting workers who have not received a paycheck in months, the police arrested more human rights activists and union leaders. The government of Bangladesh needs to intervene before the police kill someone.

By signing the petition below you will help urge the President of Bangladesh, Abdul Hamid, to stop the police brutality and prosecute the officers guilty of beating union leaders and human rights activists.

Due to the hunger strike taking place at Hossain Market, doctors and human rights activists have been visiting the protesters to provide medical attention for them. With over 1,200 workers participating in the hunger strike, these people are putting their lives at risk for the simple reason that they have not received pay in over three months. Although these workers are demanding justice, your law enforcement officers are beating and detaining their leaders.

Your government must launch an investigation into these cases of police brutality against human rights activists and union leaders. The officers guilty of using excessive force and making arbitrary arrests need to be punished for their crimes and removed from their positions. Ignoring incidents of police brutality only leads to further harm.

Take a stand against police and corporate corruption. No one should be forced to accept months without pay then be subjugated to violent police attacks. People who work without pay are called slaves. Prove to the world that the government of Bangladesh does not endorse slavery.