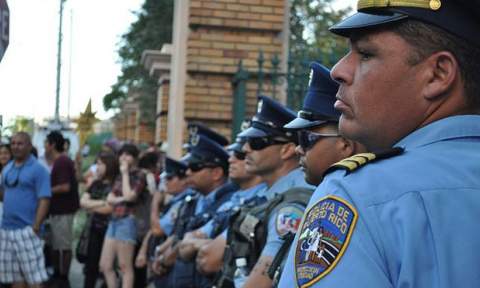 Originally published on August 27, 2014, at NationofChange.org

Twenty-two Puerto Rico Police Officers have pleaded guilty to multiple charges of robbery, extortion, civil rights violations, drug dealing, and obstruction of justice. Tainted by a pervasive history of abuse and corruption, the Puerto Rico police department operates with virtual impunity and a blatant disregard for the law. Separate investigations from the DOJ and ACLU confirm multiple reports of the police engaging in the unjustified use of excessive force, lethal force, and criminal activities.

The officers concealed their illegal activity with fraudulently obtained court documents and falsified paperwork that made it appear they were engaged in legitimate police work. They gave false testimonies in exchange for bribes, manipulated court records, planted evidence to make false arrests, sold massive amounts of drugs, broke into houses, and extorted money from their victims. Sentencing hearings are scheduled for December 2014.

According to an ACLU report titled Island of Impunity: Puerto Rico’s Outlaw Police Force, between 2005 and 2010, over 1,700 police officers were arrested for criminal activity including assault, theft, domestic violence, drug trafficking, and murder. The U.S. Department of Justice (DOJ) also concluded that Puerto Rico’s police officers often engaged in excessive and unreasonable force along with committing multiple civil rights violations.

To illustrate the impunity existing within the police department’s disciplinary system, the ACLU investigated the case of Criminal Investigations Corps Officer Miguel Diaz Martinez. After being arrested eight times in his first five years as a cop, Officer Diaz Martinez held the Acting Police Superintendent and another officer hostage with a shotgun at a police station after assaulting and threatening to kill his wife.

After expelling Officer Diaz Martinez from the police force for a short time, the department reinstated him and returned his service revolver. On the day after his full return to active duty, he killed unarmed 18-year-old José Rivera and shot the teen’s unarmed sister María Rosario Díaz in the leg for not presenting their identification. After Officer Diaz Martinez received a psychiatric certification declaring him fit for active duty, he assaulted, arrested, and imprisoned court security guard Grancid Camilo for telling him not to park his car in the judge’s parking spot.