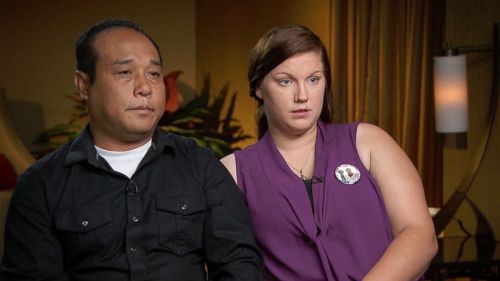 Originally published on December 21, 2014, at NationofChange.org

While executing a no-knock search warrant on the wrong house, a SWAT team from the Habersham County Sheriff’s Office nearly killed a 19-month-old toddler sleeping in his crib. Scarred with multiple burns and a collapsed lung, the toddler was rushed to the hospital and placed in a medically induced coma. A grand jury declined to indict the sheriff’s deputies involved in the raid, and city officials refuse to pay his exorbitant medical bills.

After a fire destroyed their home in Wisconsin earlier this year, Bounkham Phonesavanh, his wife Alecia, and their four young children temporarily moved in with Bounkham’s sister in Cornelia, Georgia. Two months later, they found a new house in Wisconsin and were planning to return home when a SWAT team raided their bedroom in the middle of the night.

Around 2am on May 28, the SWAT team broke down their door as Habersham Deputy Charles Long threw a flashbang grenade into their bedroom. The grenade landed in the crib of 19-month-old Bounkham Phonesavanh, Jr., blowing a hole through his chest and leaving third-degree burns along his face and torso. After slamming her husband to the floor, deputies ordered Alecia to sit down and shut up as she asked to hold her screaming child.

Instead of allowing Alecia to see her wounded son, Habersham Deputy Jason Stribling picked up the toddler, left the room, and waited outside for an ambulance. As the deputies detained the family and searched the house for drugs, Alecia and her husband discovered a pool of blood and burn marks in the crib. Their son’s pillow had been blown apart.

“I asked if he got hurt. And they said, ‘No, your son is fine. He has not sustained any serious injury,’” Alecia recalled. “They ended up telling us that he had lost a tooth.”

Hours later after failing to find any drugs in the house, deputies allowed Alecia and her family to drive to Grady Memorial Hospital in Atlanta. Her son was in the intensive burn unit and had been placed in a medically induced coma.

“His chest wall had torn down to muscle,” stated Dr. Walter Ingram, head of Grady’s burn trauma unit. “And it tore his face down to bone, down to his teeth.”

Suffering from severe burns and a collapsed lung, 19-month-old Bounkham Jr., affectionately referred to as “Bou Bou,” remained in the coma for over five weeks. His parents spent each night in the hospital not knowing if he would ever wake up again.

Using information acquired by a mendacious confidential informant, drug agent Nikki Autry secured a no-knock search warrant for the former residence of Bounkham’s nephew, Wanis Thonetheva. Suspected of dealing $50 worth of meth to the informant, Thonetheva had moved out of his mother’s house months earlier after stealing several valuables from her.

“He had broken into her room and stole some of her jewelry and stuff,” recalled Alecia. “We knew him as a thief.”

No longer living at his mother’s house, Thonetheva was arrested hours after the raid at a different location without the necessity of a SWAT team. He ended up pleading guilty to selling methamphetamine and is currently serving a 10-year prison sentence.

On June 24, Bou Bou was taken out of the medically induced coma and began rehabilitation. With doctors attempting to assess any lasting brain damage, Bou Bou endured several surgeries to repair his face and torso. Although the Phonesavanh family has accumulated nearly $1 million in medical bills, Habersham County officials refuse to compensate the family. Citing a state law that grants immunity from negligence claims against the county government, officials argue that compensation provided to the family would be an illegal gratuity.

On October 6, a grand jury failed to indict the deputies responsible for executing the no-knock search warrant. Although the deputies claimed they had no way of knowing any children were present, Alecia pointed out that several of her kids’ toys had been left in the front yard on the night of the raid. While stepping over her children’s toys, the SWAT team also chose to ignore the six stickers pasted on her minivan’s back windshield depicting the Phonesavanh parents and their four young children.

Originally deployed to handle hostage, sniper, or terrorist threats, SWAT teams are now being used to conduct drug busts, disperse protesters, and execute no-knock search warrants in low-income residential neighborhoods. In a similar case on May 16, 2010, a Detriot SWAT team tossed a flashbang grenade onto the couch where 7-year-old Aiyana Stanley-Jones had been sleeping. As the flashbang incinerated her blanket, Aiyana was immediately shot in the head by Officer Joseph Weekley. Weekly claimed that Aiyana’s grandmother had reached for his weapon, but ballistics and another officer’s testimony refute his accusations. Police later realized they had forcibly entered the wrong apartment.

“We found that police overwhelmingly use SWAT raids not for extreme emergencies like hostage situations but to carry out such basic police work as serving warrants or searching for a small amount of drugs,” said Kara Dansky, Senior Counsel with the ACLU’s Center for Justice. “Carried out by ten or more officers armed with assault rifles, flashbang grenades, and battering rams, these paramilitary raids disproportionately impacted people of color, sending the clear message that the families being raided are the enemy. This unnecessary violence causes property damage, injury, and death.”

The Phonesavanh family has created a website to raise money for Bou Bou’s medical bills and retains the option to file a civil lawsuit. U.S. Attorney Sally Yates has launched a federal investigation into the botched raid.