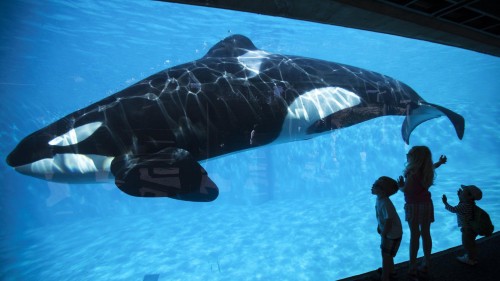 Originally published on December 30, 2014, at NationofChange.org

As attendance, revenue, and stock prices continue to plummet due to public reaction to the 2013 documentary Blackfish, People for the Ethical Treatment of Animals (PETA) has submitted a shareholder resolution to retire SeaWorld’s captive animals and return them to the ocean in large coastal sea pens for rehabilitation. After multiple musicians cancelled their concerts at SeaWorld this year in protest of animal cruelty, SeaWorld announced the firing of 311 employees and the resignation of its CEO. Appearing confident that PETA will not win the shareholder vote, SeaWorld is considering selling some of its captive orcas to Chinese corporations instead.

In the wild, killer whales swim up to 100 miles a day and live in appropriate climates for their species. Each group speaks their own unique dialect and stay with family members for life. Not a single report exists of a person being killed by an orca in the wild.

In captivity, killer whales live shortened life spans and have caused the deaths of at least four people. SeaWorld’s orcas are often prescribed daily medications to treat chronic diseases brought on by close confinement. Separating killer whale mothers from their calves causes severe physical and psychological damage resulting in lacerating their faces and breaking their teeth against the gates separating mothers from their children. Exhibiting unnatural aggression and collapsed dorsal fins, some orcas have been placed on Valium to reduce their stress levels and violence against their trainers or each other.

The documentary Blackfish follows the life of a captive orca named Tilikum responsible for the deaths of at least three people. On February 20, 1991, Tilikum and two other orcas dragged a SeaLand of the Pacific trainer named Keltie Byrne into the water and killed her. Tilikum was transferred to SeaWorld Orlando where he killed a park guest named Daniel Dukes on July 6, 1999. And on February 24, 2010, Tilikum grabbed a trainer named Dawn Brancheau by her ponytail and pulled her into the water. According to Brancheau’s autopsy report, Tilikum removed her arm, scalped her, and caused blunt force trauma to her entire body.

In response to the documentary, SeaWorld released a statement downplaying its role in practicing animal cruelty. SeaWorld rationalized separating killer whale mothers from their calves “in order to maintain a healthy social structure.” According to SeaWorld, the film falsely suggested Tilikum had swallowed Brancheau’s arm when in fact the orca had only removed her arm and scalped her. SeaWorld also suggested Tilikum had merely been playing with Dukes when the captive killer whale took his life.

Blackfish director Gabriela Cowperthwaite immediately fired back with a response to SeaWorld’s accusations against her film. Although SeaWorld claimed it had not captured a killer whale in over 35 years, Cowperthwaite pointed out that SeaWorld now uses other people to capture cetaceans for them. Listing numerous traumatic mother-calf separations, Cowperthwaite invited SeaWorld into an open discussion on the health and morality of holding intelligent creatures captive for human entertainment. She also disputed SeaWorld’s suggestion that Tilikum had been playing with Dukes when he drowned. According to Dukes’ autopsy report, his entire body had been covered in abrasions, contusions, and lacerations including avulsion of the scrotum.

Protesting the mistreatment of captive animals, several bands and musicians including Willie Nelson, Heart, .38 Special, Cheap Trick, Pat Benatar, Trace Adkins, and The Beach Boys cancelled their concerts at SeaWorld Orlando and Busch Gardens Tampa. With revenue and stock prices plummeting, SeaWorld announced on December 11 that CEO James Atchison is scheduled to resign from his post on January 15, 2015. The following day after announcing Atchison’s resignation, SeaWorld fired 311 employees in a company-wide restructuring as Atchison plans to step down with a pay package of more than $2.4 million.

After filing for an initial public offering (IPO) of stock, SeaWorld began trading on the New York Stock Exchange on April 19, 2013. In an attempt to influence policy, PETA purchased 159 shares, the minimum number required to submit shareholder resolutions. Citing federal regulations requiring shareholders to own stock for a minimum of one year before submitting resolutions, SeaWorld blocked PETA’s proposal earlier this year to retire the marine mammals to coastal sanctuaries. After waiting a full year, PETA resubmitted their resolution for shareholders to vote on before SeaWorld’s next annual meeting next summer.

Instead of filling its parks with rides and virtual reality marine mammal exhibits, SeaWorld is considering the option of selling or loaning some of its aquatic creatures to Chinese corporations expanding into theme parks and live entertainment. In an attempt to assuage public opinion, SeaWorld claims it has an expansion plan to increase the size of their pools. But selling or loaning the captive animals to foreign corporations remains a viable option.