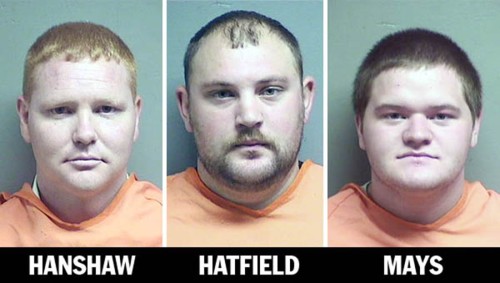 Originally published on January 18, 2015, at NationofChange.org

A federal grand jury in Cincinnati has charged three sheriff’s deputies with conspiring to deprive, and depriving, an arrestee of civil rights while acting under the color of law. Caught on surveillance video at the Lawrence County Jail, the corrections officers assaulted a handcuffed suspect and attempted to cover up the beating by allegedly falsifying incident reports. The sheriff immediately fired one of his deputies and placed the other two on paid administrative leave before obtaining warrants for their arrest.

According to the federal indictment, the victim identified as “L.K.” had been arrested on a disorderly conduct charge and taken to Lawrence County Jail. Between August 16 and 17, 2014, Lawrence County Sheriff’s Deputies Jeremy Hanshaw, Ronald Hatfield, and Jason Mays allegedly assaulted L.K. while he was restrained and not resisting or posing a threat to any officers. Deputies Hanshaw and Hatfield reportedly punched, kicked, and slammed L.K. to the ground restraining him in a chokehold while his hands were cuffed behind his back.

After restraining L.K. on a medical gurney, Hanshaw allegedly began choking him while striking the victim’s head with his elbow. Before attempting to block the beating from a surveillance camera, Mays punched L.K. in the neck as Hanshaw and Hatfield slammed the victim to the ground. In order to justify the brutal assault, the deputies reportedly falsified logs and incident reports to cover up their abusive actions.

On August 20, 2014, Lawrence County Sheriff Jeff Lawless notified the deputies that they were the focus of an internal investigation. After receiving witness statements and surveillance footage of the assault, Sheriff Lawless fired Mays and placed Hanshaw and Hatfield on paid administrative leave. After locating the victim, the prosecutor’s office obtained arrest warrants for the deputies charging Hanshaw and Hatfield with felonious assault. Mays had originally been charged with tampering with evidence.

“I was provided with what I believe is evidence of wrong doing, I acted quickly, firing one employee and suspending two others, this even before the possible victim could be found,” said Lawless. “I took an oath to uphold the law and protect all citizens. I am not sure this man would have ever returned to complain and I could have sat on it and possibly saved a black eye on the agency but the person I am would not allow me to do that.”

“The protection of civil rights is one of the FBI’s highest criminal priorities,” stated Acting Special Agent in Charge John Barrios. “The FBI is committed to holding accountable those who believe they can abuse the powers they have been granted.”