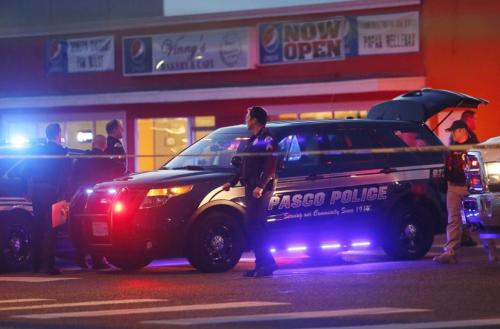 Originally published on February 14, 2015, at NationofChange.org

A witness recorded three police officers chasing and gunning down a mentally disturbed man for throwing rocks at them on Tuesday. Although the Pasco Police Department claims the man struck two of the officers with rocks and withstood the effects of a Taser, an eyewitness and the video do not corroborate their account of the incident.

Around 5pm on Tuesday, Pasco police officers Adrian Alaniz, Ryan Flanagan, and Adam Wright responded to a 911 call concerning a man allegedly throwing rocks at cars and trucks. The officers approached Antonio Zambrano-Montes in the Fiesta Foods parking lot and ordered him to put down the rocks and surrender. According to a police statement, Zambrano-Montes threw rocks of various sizes at them pelting two of the officers with rocks. After a Taser failed to have any effect on him, the officers fired their service weapons to take down Zambrano-Montes.

But Pasco resident Benjamin Patrick, who witnessed the incident, asserts that he saw Zambrano-Montes struggling with an officer when two other officers drove up to help. Zambrano-Montes began yelling at the police when he picked up two rocks or dirt clods. Patrick recalled Zambrano-Montes throwing one at the cops but missing. Then an officer fired his Taser, but Patrick does not believe both darts connected with Zambrano-Montes.

“I could not believe they were shooting guns. There were cars and people everywhere,” Patrick recalled. “Yes, he was resisting. Yes, he was wrong. But it looked like there might be something wrong with him. And he wasn’t hurting anyone. He had a rock, not a gun. It seems it could have been handled differently.”

Another witness recorded the shooting on their cell phone. The video shows the officers firing five shots at Zambrano-Montes before chasing him across the street. As Zambrano-Montes turned around confronting the cops with his hand slightly raised, they gunned him down on the sidewalk.

“This is a very disturbing incident, and our hearts go out to the family of Antonio Zambrano-Montes. Fleeing from police and not following an officer’s command should not be sufficient for a person to get shot,” said Kathleen Taylor, executive director of the American Civil Liberties Union in Washington state. “Lethal force should be used only as an absolute last resort. Police need to understand how to de-escalate confrontations and use force only as necessary.”

Flanagan is a nine-year veteran of the department and traffic safety officer. Wright is an eight-year veteran and firearms instructor. Alaniz has been on the force for two years.

In 2009, Flanagan and another officer were accused of racial profiling and excessive force for restraining Pasco resident Maria Davila-Marquez and pressing her face against the heated hood of their patrol car. After suffering second-degree burns, Davila-Marquez filed a lawsuit against the city and won a $100,000 settlement. According to the lawsuit, Flanagan was never disciplined for his actions.

On January 16, 2014, officers responded to reports of a man striking cars with a broom. Confronted by law enforcement, Zambrano-Montes picked up a rocking chair and attempted to throw it at Officer Adam Brewster. After throwing a mailbox and a post at Brewster, Zambrano-Montes grabbed the officer’s belt attempting to retrieve the service pistol from his holster.

Officer Jeffrey Cobb shot Zambrano-Montes with a Taser and helped Brewster handcuff him. After being transported to the Lourdes Medical Center, Zambrano-Montes admitted that he had been on methamphetamines. He pleaded guilty last June.

After failing to appear in court two weeks ago, a bench warrant was issued for the arrest of Zambrano-Montes. He was released from police custody a day before he was killed.