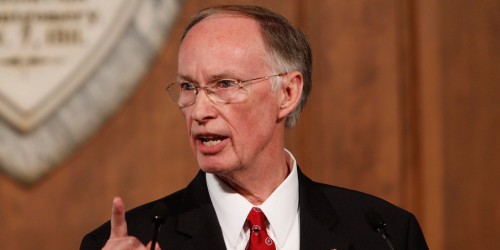 Originally published on February 19, 2015, at NationofChange.org

The Governor of Alabama formally apologized to the government of India after an officer from the Madison Police Department aggressively assaulted one of their citizens. Dash cam video from two patrol cars revealed the 57-year-old Indian man visiting American relatives had not been committing a crime when Officer Eric Parker slammed him to the ground leaving him partially paralyzed. As Officer Parker was charged with assault, online fundraising websites began accepting separate donations for Parker’s legal fund and the uninsured victim’s medical expenses.

While visiting his son’s family in Madison, Alabama, 57-year-old Sureshbhai Patel was taking a morning walk when an unidentified person called 911 reporting a “skinny black guy” suspiciously peering into garages on February 6. Responding to the call, Officer Eric Parker and his partner pulled up alongside Patel and confronted him on the sidewalk. Patel, who does not speak English, struggled to communicate with the police officers while failing to answer their questions or comply with their orders.

“He’s saying, ‘No English,’” one of the officers informed his partner as they continued to interrogate Patel.

When Patel attempted to walk away from the officers, Officer Parker restrained him by pulling Patel’s arms behind his back. As Patel jerked away, Parker aggressively slammed his face into the ground. Dash cam video from Parker’s patrol car and another patrol car recorded the incident, which resulted in Patel’s bloodied nose and a severe neck injury leaving him partially paralyzed.

As another officer approached them, one of the cops acknowledged, “He don’t speak a lick of English.”

On February 12, Officer Parker was charged with third-degree assault. After posting bail, Parker was released from jail. He pleaded not guilty.

After reviewing the videos, Madison Police Chief Larry Muncey admitted Parker’s actions were not justified and recommended firing him. Although Patel did not respond to the officers’ commands, Muncey acknowledged that the Indian man had committed no crime. Muncey stated, “I found that Officer Eric Parker’s actions did not meet the high standards and expectations of the Madison City Police Department.”

While recovering from surgery after doctors performed a cervical spinal fusion, Patel filed a lawsuit against the city and the two officers who initially confronted him. Since Patel does not have health insurance, his family launched a fundraising campaign at GoFundMe.com to accept donations towards his medical expenses. Officer Parker has also started accepting donations at indiegogo.com toward his legal defense.

Governor Robert Bentley of Alabama formally apologized to the government of India this week for the brutal assault. Referring to the use of excessive force, Governor Bentley assured the Indian government that justice would be served and expressed regret for Patel’s spinal cord injuries.

“I wish to assure you and the government of India that we will see that justice is done,” wrote Governor Bentley. “I deeply regret the unfortunate use of excessive force by the Madison Police Department on Sureshbhai Patel and for the injuries sustained by Mr. Patel. I sincerely hope that Mr. Patel continues to improve and that he will regain full use of his legs.”