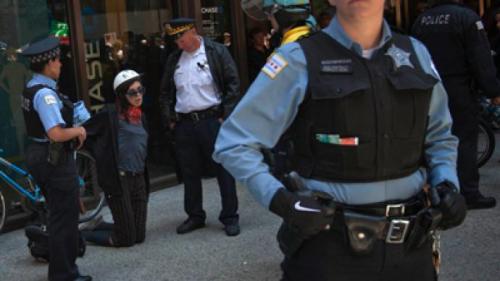 Originally published on February 27, 2015, at NationofChange.org

According to British newspaper The Guardian, the Chicago Police Department (CPD) has been detaining U.S. citizens at a secure facility while denying access to defense attorneys and committing human rights abuses. Accused of using excessive force to coerce confessions and leaving detainees shackled for prolonged periods, the CPD has denied breaking any laws or violating suspects’ rights. But marred with a history of abuse and corruption, law enforcement officials within the CPD have been caught torturing people for decades.

In an article published this week, The Guardian exposed a detention facility located within a nondescript warehouse on Chicago’s West Side known as Homan Square. Formerly owned by Sears, Roebuck & Co., the building also houses CPD’s Evidence Recovered Property Section, Bureau of Organized Crime, SWAT unit evidence technicians, and ballistics lab. But according to arrestees and defense attorneys, suspects are detained at the site while kept out of official booking databases and denied access to legal counsel.

On May 16, 2012, the CPD arrested Brian Jacob Church, a protester known as one of the “NATO 3,” and detained him at Homan Square. Instead of entering Church’s arrest into an official booking database, officers reportedly left his wrist cuffed to a bench with his legs shackled together for approximately 17 hours. Denying him access to his attorney, the police repeatedly interrogated Church without informing him of his Miranda rights to remain silent.

“I had essentially figured, ‘All right, well, they disappeared us and so we’re probably never going to see the light of day again,’” Church recalled.

After roughly 20 hours, Church was eventually transferred to the 11th district station, where he was fingerprinted, photographed, and charged with terrorism-related offenses. In April 2014, Church and his two co-defendants were convicted of possessing an incendiary device and misdemeanor mob action, but they were acquitted of the terrorism-related charges.

In January 2013, Eliza Solowiej of Chicago’s First Defense Legal Aid attempted to contact a client who had been detained at Homan Square. According to the attorney, officers changed her client’s name in the booking database before transferring him to the site at Homan Square. She finally located him after her client had been transported to a hospital with a head injury.

“He said that the officers caused his head injuries in an interrogation room at Homan Square. I had been looking for him for six to eight hours, and every department member I talked to said they had never heard of him,” Solowiej said. “He sent me a phone pic of his head injuries because I had seen him in a police station right before he was transferred to Homan Square without any.”

In September 2013, Chicago attorney Julia Bartmes was denied access to a 15-year-old boy detained within the Homan Square facility. After interrogating the teenager for at least 12 hours, the CPD released her client without charges.

On February 2, 2013, John Hubbard was arrested for allegedly buying drugs from an undercover officer and detained at Homan Square. Found unresponsive inside an interview room, Hubbard was pronounced dead of a reported heroin overdose by the Cook County medical examiner.

“CPD abides by all laws, rules and guidelines pertaining to any interviews of suspects or witnesses, at Homan Square or any other CPD facility,” department spokesman Martin Maloney responded to the accusations. “If lawyers have a client detained at Homan Square, just like any other facility, they are allowed to speak to and visit them.”

Although the CPD denies any wrongdoing, the department has a history of torturing suspects in order to obtain false confessions. Between 1972 and 1991, Chicago Police Commander Jon Burge and his men tortured hundreds of people to extract forced confessions from them. Suspended from the department in 1991, Burge was fired two years later after the Police Department Review Board ruled that he had used torture.

Convicted of perjury in 2010, Burge only spent four years in prison due to the fact that the statute of limitations prevents prosecutors from charging him and his fellow officers with multiple counts of torture. After costing Chicago and Cook County nearly $100 million in legal fees and settlements, Burge still receives a $4,000 monthly pension from the city.

Former Chicago homicide detective and Guantanamo Bay interrogator, Richard Zuley, faces multiple lawsuits alleging he coerced confessions, threatened suspects’ family members, planted evidence, and committed torture. After retiring from the department, Zuley was placed in charge of the interrogation of Guantanamo detainee, Mohammedou Ould Slahi. According to Slahi’s testimony, Zuley tortured him, subjected him to mock executions, and threatened to bring Slahi’s mother to Guantanamo to rape her.

Last year, former Chicago police officer Steven Mandell was sentenced to life in prison for plotting to kidnap, torture, extort, and murder a businessman in order to acquire his real estate holdings. Convicted of kidnapping two drug dealers and murdering a truck company owner, Mandell’s previous convictions were overturned on legal grounds involving the admissibility of evidence at his trials, not because of innocence. Although they cannot prove his guilt, law enforcement officials believe Mandell has murdered at least eight people since resigning in disgrace from the CPD.