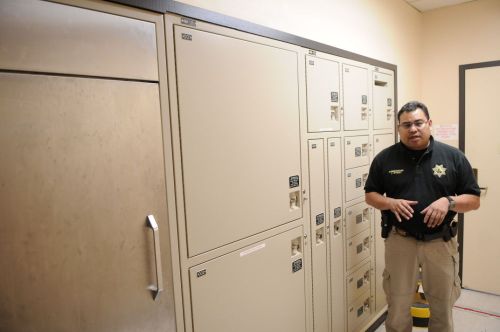 Originally published on April 9, 2015, at NationofChange.org

A former Police Commander was sentenced earlier this week to 30 months in prison after pleading guilty to possession of stolen firearms, extortion, and wire fraud. In addition to the federal charges, former Pacific Grove Police Commander John Nyunt has also pleaded guilty in state court to second-degree commercial burglary, threatening a witness, and being an accessory after the fact. By abusing his position within the police department, Nyunt had profited from a life of crime until his ex-wife turned against him.

In 2009, Nyunt served as both Commander of the Pacific Grove Police Department (PGPD) and as an instructor at the former police academy at Monterey Peninsula College (MPC). The MPC police academy offered to donate numerous assault rifles, shotguns, and semi-automatic pistols to the PGPD. Nyunt accepted the donation of firearms without authorization and secretly sold the stolen guns instead of giving them to law enforcement.

In 2010, Cmdr. Nyunt and his wife, Kristin, opened a private investigation firm in California called Nyunt Consulting Investigations Services (NCIS). Instead of opening petty crime cases, Nyunt would direct victims to hire NCIS for security and investigative services. After Nyunt gave his wife access to the departmental database and his password without authorization, Kristin collected personal information and bank account numbers in order to commit dozens of identity thefts including Nyunt’s son, his ex-wife, other police officers, and citizens throughout the state and country. Nyunt also systematically ordered subordinates in the PGPD to close investigations in which Kristin was the prime suspect.

After Nyunt and his wife separated, Kristin threatened to contact the police and inform them of Nyunt’s involvement in her crimes. In a phone conversation recorded by Kristin, Nyunt threatened to shoot his fellow police officers and Monterey County District Attorney investigators with an assault rifle and slit Kristin’s throat if she began cooperating with prosecutors. In 2012, Kristin was arrested and charged with 43 counts of identity theft, burglary, and fraud.

According to Pacific Grove-Seaside Police Chief Vicki Myers, Nyunt retired from the department in November 2013 due to medical reasons. In March 2014, Nyunt was arrested for threatening to kill his ex-wife. A month later, Nyunt pleaded guilty in state court to one count of dissuading a person from reporting a crime by threats of violence, one count of being an accessory after the fact to theft and burglary, and one count of being an accomplice to the burglary of a business. He received a sentence of three years in state prison.

On May 13, 2014, Nyunt pleaded guilty in federal court to extortion and wire fraud. After telling a victim of electronic surveillance and stalking that the police department would not help her, Nyunt instructed the victim to hire NCIS. Pretending to provide security and investigate her complaint, Nyunt and Kristin ultimately charged the victim $10,000 for services that they never provided. When the victim could no longer afford their purported services, Nyunt told her falsely that the police department and the FBI would continue to investigate her complaint.

On December 16, 2014, Nyunt pleaded guilty to possession of the stolen firearms from the MPC police academy. Nyunt was sentenced on Tuesday to 30 months in prison and ordered to pay restitution of $9,000 to an unnamed extortion victim, $1867.95 to the PGPD for unauthorized use of the department’s database, and a $5,000 fine. Nyunt’s 30-month sentence will run concurrently with his state conviction.