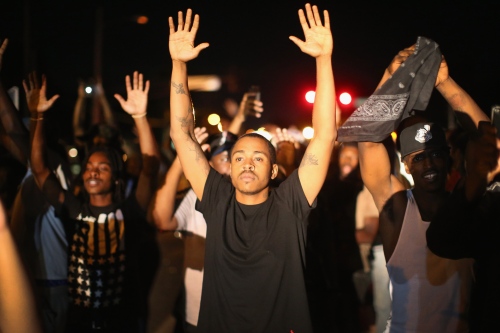 FERGUSON, MO - AUGUST 12: Demonstrators protest the killing of teenager Michael Brown on August 12, 2014 in Ferguson, Missouri. Brown was shot and killed by a police officer on Saturday in the St. Louis suburb of Ferguson. Ferguson has experienced two days of violent protests since the killing but, tonight's protest was peaceful. (Photo by Scott Olson/Getty Images)

Originally published on July 9, 2015, at NationofChange.org

The FBI is launching an investigation into allegations that Florida deputies tampered with evidence and lied under oath after killing a man walking home with an unloaded air rifle. The Justice Department decided to look into the accusations when a photograph appeared revealing that the officer who fired the fatal shots had lied to investigators and possibly tampered with evidence to justify the shooting. Although the deputy was caught lying under oath, the sheriff blames the victim for his own death and gave the deputy a bravery award while the shooting was still under investigation.

On the afternoon of July 31, 2013, a 33-year-old computer engineer named Jermaine McBean was walking home after purchasing a Winchester Model 1000 Air Rifle from a local pawn shop. Uncertain whether McBean was balancing a real gun or a BB gun on his shoulders, three witnesses called 911 to report the incident. While driving his van down the road, Michael Russell McCarthy called 911 and informed the dispatcher that he was following a man possibly carrying a .22 caliber rifle or a pellet gun.

“He had a white plastic bag around the center of it, but the barrel was sticking out one end and the stock was sticking out the other end,” McCarthy recalled. “It was obvious it was a rifle. To be honest with you, the gun was painted camo but I wasn’t sure if it was a fake gun or a BB gun.”