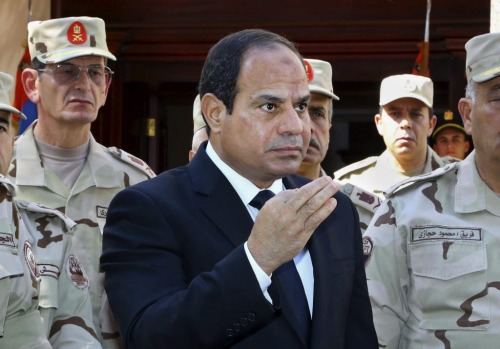 Originally published on October 27, 2014, at NationofChange.org

An Egyptian court sentenced 23 young activists to three years in prison for protesting without a government permit on Sunday. Following the political turbulence of the Arab Spring and the downfall of President Morsi, Egypt has been aggressively prosecuting anyone caught practicing free speech or peaceful assembly in an attempt to silence dissent. Although the U.S. State Department has publicly condemned the court’s decision, President Obama continues to fund the new Egyptian government and its military.

On June 21, activists marched towards the presidential palace in Cairo protesting against Egypt’s draconian anti-protest law and the repeated incarceration of political blogger, Alaa Abd El-Fattah, along with others. As they marched to the palace, the activists were attacked by several groups of men wearing civilian clothes. As security forces dispersed the crowd, they arrested 24 young activists including a child named Islam Tawfik Mohamed Hassan who faces trial in a juvenile court according to Amnesty International.

While buying water from a kiosk, Yara Sallam and her cousin were arrested along with the protesters. According to witnesses, Sallam and her cousin had not been participating in the demonstration. The following day, security forces released Sallam’s cousin, but kept Sallam in custody after discovering her occupation as a lawyer with the Egyptian Initiative for Personal Rights. She has been convicted along with the protesters and sentenced to three years in prison. Amnesty International considers Sallam a prisoner of conscience who must be released immediately.