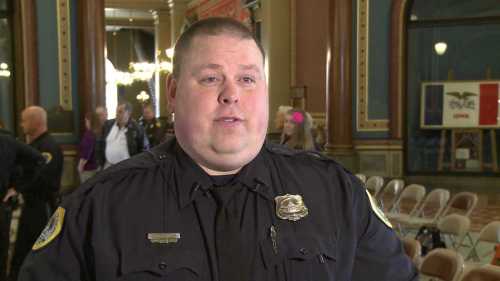 Originally published on June 24, 2015, at NationofChange.org

A former Des Moines police officer was sentenced on Monday to 63 months in federal prison for kicking a restrained suspect in the face. Although dash cam footage from a patrol car caught the officer kicking in the suspect’s teeth and breaking his nose, Officer Colin Boone did not mention using excessive force in his arrest report. Instead of trying to cover up Officer Boone’s actions, his fellow officers reported the crime to their supervisors after learning Boone had submitted a false narrative.

Early on the morning of February 19, 2013, Orville Hill was driving his minivan on an icy road when he accidentally crashed into a concrete barrier. After several Des Moines police officers arrived on the scene, Hill panicked and attempted to drive away. The officers immediately pulled Hill from the van and threw him onto the ground before restraining him.

Dash cam footage revealed three officers holding Hill on the ground and a fourth cop standing over him when Officer Colin Boone ran up to them viciously kicking Hill in the face. Although Hill had been lying facedown and was not attempting to attack the officers, Boone knocked out two of his front teeth and broke his nose. After the incident, Hill was taken to Broadlawns Medical Center for treatment and stitches.

In his arrest report, Boone failed to mention using excessive force on the restrained suspect. Instead of trying to cover up the incident, Boone’s fellow officers reported the abuse to their supervisors. Dash cam footage from a patrol car verified their allegations against Boone.