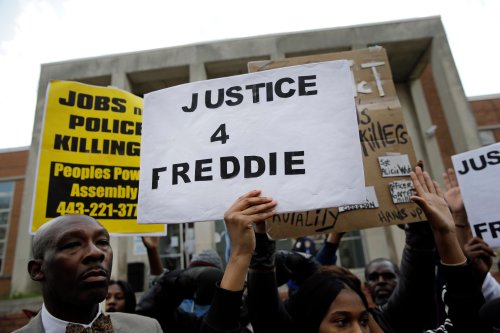 Originally published on April 23, 2015, at NationofChange.org

The Justice Department announced this week that it is opening a criminal investigation into the death of a suspect who died from fatal spinal cord injuries while in police custody. Although Baltimore police officers claim that they did not use force against the suspect, witnesses and cell phone footage reveal officers dragging the suspect as he screamed in pain. The Justice Department has already been conducting a review of the Baltimore Police Department after the city paid nearly $6 million in court judgments and settlements involving over 100 lawsuits alleging police misconduct since 2011.

At 8:39 a.m. on April 12, a Baltimore police officer made eye contact with two individuals standing at a street corner who immediately fled. Officers pursued the individuals and apprehended one of them. According to the police, 25-year-old Freddie Gray surrendered without requiring the use of force as another officer aimed a Taser at Gray but did not deploy it. After restraining him, Officer Garrett Miller allegedly found a switchblade inside Gray’s pants pocket.

Witnesses assert that the arresting officers used excessive force to arrest Gray and refused to give him medical treatment. After watching the officers sitting on Gray’s back while handcuffing him, a bystander named Kiona Mack took out her cellphone and recorded a video of officers dragging Gray into the back of a police van as he screamed in agony.

“They had him in a crab-like position, where his legs were bent back and his arms,” another witness recalled. “He was handcuffed, and at this point, they had knees in his back and his head.”