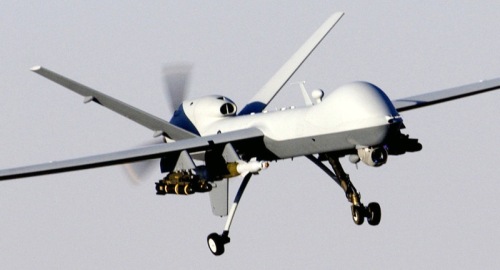 Originally published on October 23, 2014, at NationofChange.org

Although the U.S. government claims only confirmed terrorists at the highest level are being targeted in drone strikes, the CIA does not know the names or identities of the majority of people the agency has killed in Pakistan since June 2004. After a decade of drone strikes in Pakistan, less than 4% of the victims have been identified as named members of al-Qaeda. Since the inception of the drone program, unmanned aerial vehicles (UAVs) have unconstitutionally murdered at least four American citizens.

According to the Bureau of Investigative Journalism, the CIA has launched 400 drone strikes in Pakistan killing at least 2,379 people. Only 704 of these drone strike victims have been identified. 295 have been classified as militants belonging to either the Afghan Taliban or the Pakistani Taliban, while only 84 have been positively identified as members of al-Qaeda.

At least 168 Pakistani children have died in drone strikes, but only 99 have been identified by name. Sixty-seven of these children were executed in a drone strike on a madrassa in October 2006 that left 81 civilians dead.

Drone strikes have killed at least 55 women in Pakistan, but only two have been identified by name. Bibi Mamana, a grandmother in her 60s, was slaughtered while tending a field near her home. Her grandchildren were injured in the attack. Raquel Burgos Garcia, the Spanish wife of an al Qaeda member, died in the same UAV attack that killed her husband. The Bureau believes the number of women killed in drone strikes is significantly lower because many women’s deaths in Pakistan traditionally remain unreported.

Last year, Secretary of State John Kerry claimed only “confirmed terrorist targets at the highest level” were fired upon during drone strikes. If the CIA does not have a “near certainty” that a strike would result in zero civilian deaths, President Barack Obama personally decides whether or not to attack. But Obama has also changed the criteria determining whether a person is a civilian or not. According to the president, all military-age males within a strike zone are classified as enemy combatants unless explicit intelligence posthumously proves their innocence.

“It bothers me when they say there were seven guys, so they must all be militants,” admitted a senior intelligence official. “They count the corpses, and they’re not really sure who they are.”

Although Pakistan’s government maintains the drone strikes violate its national sovereignty, former President Pervez Musharraf admitted to approving the strikes during his term. Under pressure from the courts and the public to end the strikes, Prime Minister Nawaz Sharif publicly condemned the attacks while allowing them to continue. The Pakistani army is suspected of actually deciding the country’s policy toward drone strikes.

On December 1, 2005, a drone strike killed a senior Al-Qaeda member in the village of Miran Shah. The Pakistani government claimed the terrorist had blown himself up while building a bomb inside a house, but PBS Frontline journalist Hayatullah Khan investigated the scene and discovered remnants of a Hellfire missile fired from a UAV. After publishing photographs of the missile, Khan was abducted by five gunmen who ran his vehicle off the road on December 5, 2005. Six months later, Khan’s bullet-ridden body was found wearing state-issued handcuffs.

Responsible for launching drone strikes against a Yemeni wedding and a Pakistani tribal council meeting, the Obama administration has also used drones to take the lives of four American citizens. The U.S. government murdered Anwar al-Aulaqi, commonly misspelled as “al-Awlaki,” his 16-year-old son Abdulrahman al-Aulaqi, Samir Khan, and Jude Kenan Mohammad without regard for their constitutional rights.

On September 30, 2011, two Predator drones launched from a secret CIA base, crossed the border into northern Yemen, and fired Hellfire missiles at Anwar’s vehicle. The government would later learn one of the passengers in Anwar’s vehicle had been another U.S. citizen, Samir Khan. On the evening of October 14, 2011, Abdulrahman attended a barbeque with his friends and cousins when a UAV butchered everyone in the vicinity. A month later, a CIA drone strike killed Florida native Jude Kenan Mohammad in Pakistan.

Attorney General Eric Holder claims Anwar had been targeted after ceasing to cooperate with the FBI and uploading a series of videos advocating violence against the U.S. government. But last year, Holder admitted Abdulrahman, Samir Khan, and Jude Kenan Mohammad had not been specifically targeted in the attacks that killed them. The Justice Department has argued that their civil rights were never violated because they had not been specifically targeted for assassination. Due process isn’t taken into account when the U.S. government claims to accidentally murder its own citizens.

“It’s important for the American people to know when the president can kill an American citizen, and when [he] can’t,” asserted Senator Ron Wyden.

The architect of the drone program, John Brennan, is now the CIA Director and orchestrator of UAV strikes in Pakistan. Brennan has been caught lying about hacking into computers belonging to members of the Senate Intelligence Committee and falsely accusing U.S. senators of hacking into the CIA’s computers. State Department officials have criticized the CIA’s use of signature strikes designed to attack unidentified people based on evidence of suspicious behavior or other signatures including weddings, barbeques, and tribal council meetings. As the U.S. government’s drone program continues violating national sovereignty and killing innocents, it is only a matter of time before China or Russia engages in this lethal competition.