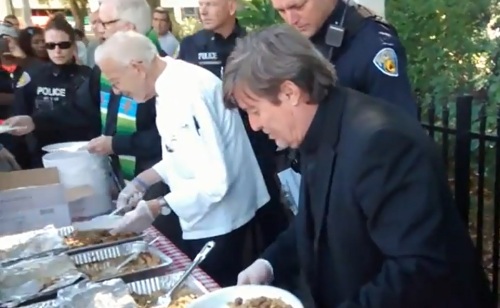 Originally published on November 9, 2014, at NationofChange.org

In an act of compassion and civil disobedience, a 90-year-old man and two pastors in Fort Lauderdale openly defied a new city ordinance barring anyone from feeding homeless people in public. After police intervened and charged them with a crime, 90-year-old Arnold Abbott and Pastor Dwayne Black returned several days later to break the draconian law again. Although Abbott received another citation, police decided not to place him in custody.

Last Sunday, Arnold Abbott, Pastor Dwayne Black of The Sanctuary Church in Fort Lauderdale, and Mark Sims of St. Mary Magdalene Episcopal Church in Coral Springs fed homeless people in a public park in South Florida two days after the city passed a new ordinance outlawing the provision of food to vagrants in public. After getting arrested, the two pastors and elderly homeless advocate each face a $500 fine and up to 60 days in jail.

“One of the police officers said, ‘Drop that plate right now,’ as if I were carrying a weapon,” recalled Abbott. “It’s man’s inhumanity to man is all it is.”

On Wednesday evening, Abbott and Pastor Black remained undeterred as they served a four-course meal to nearly 100 homeless people at Fort Lauderdale Beach. After police officers recorded the simple act of kindness on their video cameras, they escorted Abbott away from the crowd to fingerprint him and issue another citation. Wary of public backlash, law enforcement officials chose not to place Abbott in handcuffs and haul him off to jail again.

“I’m grateful that they allowed us to feed the people before they gave us the citation,” Abbott stated afterward.

A World War II veteran and civil rights activist, Abbot has been serving the homeless for over 20 years in honor of his late wife. Since feeding homeless people has become his life’s work, Abbott operates several programs including a culinary school that trains homeless people how to cook while helping them find jobs in local kitchens. Through his nonprofit organization, Love Thy Neighbor, Abbott has helped put hundreds of homeless people through culinary school.

Homeless and addicted to crack six years before meeting Abbott, Rosemary Servoky became one of Abbott’s numerous culinary students. She now works with Love Thy Neighbor and is living off the streets.

Backed by the Chamber of Commerce, the recent city ordinance is the fourth law Fort Lauderdale has passed this year against the homeless. The other laws ban homeless people from panhandling at traffic intersections and outlaw sleeping or storing their belongings on public property. According to Pastor Black, the recent food-sharing ordinance passed after a long meeting past midnight after many people had gone home.

“It’s a pubic safety issue. It’s a public health issue,” Fort Lauderdale Mayor Jack Seiler rationalized. “The experts have all said that if you’re going to feed them to get them from breakfast to lunch to dinner, all you’re doing is enabling that cycle of homelessness.”

Abbott boldly stated Mayor Seiler and the city commission are just puppets of business owners who want to either run the homeless out of town or keep them out of sight. Fearing a drop in tourism and a recent rise in the local homeless population, city officials have decided to design laws targeted at punishing impoverished people instead of addressing the larger issues of assisting those often plagued by mental health disorders and substance abuse addictions.

In 1999, the city attempted to prevent Abbott from feeding homeless people on Fort Lauderdale Beach. In response, Abbott sued the city and won. Abbott plans to fight the charges against him and the pastors while acknowledging that he may be forced to take the city back to court in order to win.

“I don’t do things to purposefully aggravate the situation,” stated Abbott. “I’m trying to work with the city. Any human has the right to help his fellow man.”