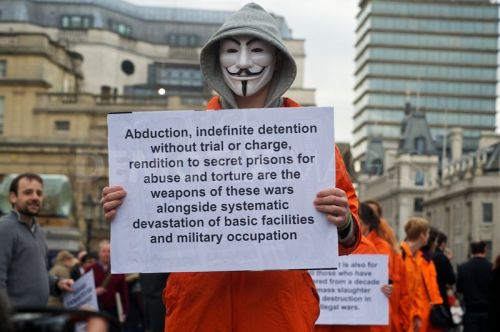 Originally published on December 1, 2014, at NationofChange.org

The United Nations Committee Against Torture released a report addressing a myriad of human rights violations committed by the U.S. government. While commending President Obama for qualifying enhanced interrogation techniques as torture, the U.N. Committee decries his administration’s lack of transparency, refusal to prosecute, and inability to prevent rampant abuse.

In its first review of the U.S. since 2006, the U.N. Convention against Torture and Other Cruel Inhuman or Degrading Treatment or Punishment held hearings in Geneva throughout November. U.S. Representative to the Human Rights Council Keith Harper and State Department Acting Legal Adviser Mary McLeod gave statements during the proceedings, while the parents of Michael Brown testified against police brutality.

“The United States is proud of its record as a leader in respecting, promoting, and defending human rights and the rule of law, both at home and around the world,” stated McLeod. “But in the wake of the 9/11 attacks, we regrettably did not always live up to our own values, including those reflected in the Convention. As President Obama has acknowledged, we crossed the line and we take responsibility for that.”

In the conclusion of its report, the Committee applauded President Obama’s statements qualifying enhanced interrogation as torture at a press conference on August 1. The president admitted, “In the immediate aftermath of 9/11, we did some things that were wrong. We did a whole lot of things that were right, but we tortured some folks. We did things that were contrary to our values.”

While lauding the president for signing Executive Order 13491, which revokes the use of torture on detainees, the Committee heavily criticizes the CIA’s lack of information regarding rendition, black sites, harsh interrogation techniques, and prisoners’ deaths. Focusing on the prolonged declassification process of the Senate Select Committee on Intelligence’s report on the CIA’s detention and torture program, the Committee denounces the CIA’s constant efforts in redacting information and stalling the release of the report. After hacking into the Senate Intelligence Committee’s computers and falsely accusing the oversight committee of theft, CIA Director John Brennan has savagely fought against the release of the Senate’s report.

The CIA and Defense Department have been responsible for numerous deaths involving human rights abuses against detainees. In November 2002, CIA officers left black site detainee Gul Rahman half-naked in an unheated cell overnight where he ended up freezing to death. At the Abu Ghraib prison in 2003, Manadel al-Jamadi died in a shower room under CIA interrogation with his arms tied behind his back. Between June 19 and 20, 2003, CIA contractor David Passaro beat an Afghan suspect named Abdul Wali to death with a metal flashlight. On November 9, 2005, CIA Director of National Clandestine Service Jose Rodriguez, Jr. authorized the burning of 92 videotapes depicting the enhanced interrogation of Abu Zubaydah and ’Abd al-Nashiri.

Deeply concerned about force-feeding practices and the indefinite detention of Guantanamo prisoners, the report calls for investigations into allegations of torture and the utilization of biased military commissions. Although Section 3 of Executive Order 13492 required Guantanamo’s detention facilities to be shut down by 2010, the report states 148 men remain imprisoned within the facility. Nine detainees have died since 2006 including seven suicides. Mass hunger strikes have led to brutal force-feeding practices that have been condemned by the Committee.

The report strongly criticizes the widespread prevalence of sexual violence including rape in jails, prisons, and other detention facilities. The Committee also notes the majority of detention facilities do not have statutes restricting the shackling of incarcerated pregnant women.

In 2012, 958 inmates died in the custody of local jails while 3,351 died in state prisons. After multiple reports of botched executions, the Committee denounced subjecting condemned prisoners to excruciating lethal injections. The report also encourages the U.S. government to abolish the death penalty.

Concerned with excessive police brutality and the militarization of local law enforcement, the Committee is highly critical of the overuse of Tasers and acts of torture committed by Commander Jon Burge and his men within the Chicago Police Department. Operating for decades with impunity, Burge tortured over 100 people to obtain false confessions. Convicted of perjury in 2010, Burge only spent four years in prison due to the fact that the statute of limitations prevents prosecutors from charging him and his fellow officers with the multiple counts of torture. After costing Chicago and Cook County nearly $100 million in legal fees and settlements, Burge still receives a $4,000 monthly pension from the city.

The Committee concluded the report by addressing the prevalence of rape in the military and the Defense Department’s failure to deter further sexual assaults. Refusing to actively investigation numerous rape allegations, the military turns a blind eye to human rights abuses within its ranks. By handing out light sentences to convicted rapists, the Defense Department does nothing to prevent reprisals or future attacks.

“The Obama administration needs to match its rhetoric with actions by supporting full accountability for torture,” asserted American Civil Liberties Union Human Rights Program Director Jamil Dakwar, who attended the review in Geneva. “As a start, that means allowing the release of the Senate’s torture report summary without redactions that would defeat report’s primary purpose, which is to expose the full extent of government abuse. It also means ensuring a top-to-bottom criminal investigation of the torture that occurred.”