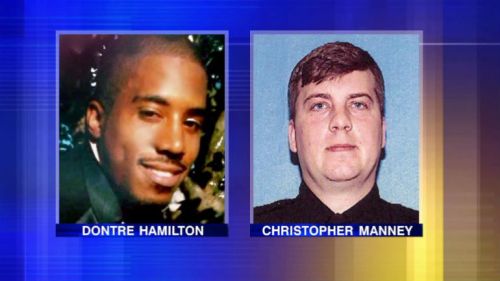 Originally published on December 3, 2014, at NationofChange.org

In response to the district attorney’s lethargic investigation, the family of a mentally ill man who was shot 14 times by a Milwaukee police officer has released his autopsy report this week. According to the medical examiner, seven of the gunshots were fired in a downward trajectory and one of the bullet wounds proves he had been shot in the back.

On April 30, Dontre Hamilton took a nap next to the statue in Red Arrow Park while waiting for his brother, Nate, to give him a ride. Following company policy, a Starbucks employee called 911 to report someone sleeping in front of the store. Around 1pm, two Milwaukee police officers responded to the call and approached Hamilton.

The officers spoke with Hamilton for a few minutes and left without arresting him. A Starbucks employee called 911 again asking officers to remove Hamilton even though he was not panhandling or bothering anyone. Several minutes later, the same two officers returned and approached the coffee shop.

At 3:28pm, Officer Christopher Manney responded to an earlier voicemail unaware that the two other officers had already responded to Red Arrow Park twice. Manney ordered Hamilton to stand up and decided to conduct a pat-down. After ordering Hamilton to raise his arms, Manney approached Hamilton from behind, reached under his arms, and placed his hands on Hamilton’s chest to conduct a search for weapons. As Hamilton lowered his arms, a struggle ensued.

According to the police, Manney pulled his baton out to subdue the suspect, but Hamilton managed to disarm the officer. Manney claims Hamilton struck him on the side of the neck with the baton. Fearing for his life, Manney unholstered his gun and fired 14 rounds into Hamilton. But eyewitnesses do not corroborate the officer’s account.

According to a Starbucks barista named Kelly Brandmeyer, Hamilton had been holding the baton in a defensive position when Manney gunned him down. Around 3:30pm, Brandmeyer heard a man shouting before she moved to the window to watch the fight. Although she did not witness the beginning of the encounter, Brandmeyer and her coworker never saw Hamilton strike Manney. Instead, Manney lunged at Hamilton in an attempt to retrieve the baton but missed. Without issuing a verbal warning, Manney pulled out his firearm and fired 14 rounds into Hamilton’s neck, chest, arms, and back.

The following day, Deputy Chief Medical Examiner Wieslawa Tlomak performed the autopsy on Hamilton. According to the report, seven of the bullets were fired in a downward trajectory possibly indicating that Manney continued shooting Hamilton as he fell to the ground. One of the bullets had been fired into Hamilton’s back without leaving an exit wound. Due to the fact that the medical examiner found no gunpowder residue on Hamilton’s clothes or skin, Manney had repeatedly shot Hamilton from a distance.

The medical examiner also discovered Hamilton had suffered blunt force injuries to his chin, neck, scalp, and right arm. The toxicology screening found no drugs in his system.

Hamilton had been diagnosed with paranoid schizophrenia last year after stabbing himself in the neck at his apartment. According to his family, Hamilton began to drift away after his son died of sudden infant death syndrome six years ago. Growing increasingly paranoid of his apartment building, Hamilton got a room at the Hampton Inn and called his brother, Nate. Concerned for his brother, Nate agreed to meet Hamilton after work at Red Arrow Park and drive him to Nate’s house.

“To my dying day, I will be speaking for everyone with mental illness until there are better places…to get the help and care that they need,” said his mother, Maria Hamilton.

On October 15, the Milwaukee Police Department fired Manney for improper use of a pat-down on an emotionally disturbed person. Instead of treating Hamilton as a mentally ill individual, Manney disregarded his training by treating him as a dangerous criminal. According to Milwaukee Police Chief Ed Flynn, Manney did not use excessive force when he shot Hamilton 14 times.

“You don’t go hands-on and start frisking somebody only because they appear to be mentally ill,” stated Flynn. “We’ve got training and protocols that guide our approach to people that are apparently mentally ill. Going hands-on with a pat-down that was not justified by a reasonable suspicion resulted in the confrontation.”

Manney has filed an appeal for his termination while a panel of doctors will review his request for duty disability. Manney claims he developed post-traumatic stress disorder after shooting Hamilton 14 times. In a memo to Chief Flynn, Manney refers to Officer Jay Jackson’s description of Hamilton as “big” and “muscular.” But the medical examiner reported Hamilton as 5’ 7” and 169lbs.

“I’m not going to grieve until he’s in jail,” asserted Maria Hamilton. “I’m still angry because I feel like they’re not being honest. Yes, it’s a plus that he was fired, but he took a man’s life, and like any other citizen would go to jail.”

While Hamilton’s family has asked the police to release the photographs documenting Manney’s injuries, the police officers’ union has declared a vote of no confidence in Chief Flynn’s leadership. In a scathing press release, the president of the Milwaukee Police Association, Mike Crivello, referred to Chief Flynn’s decision to terminate Manney as “confused” and “cowardice.”

“My inner cop is not dead,” responded Flynn. “Every member of this police department has had to make critical decisions under pressure with insufficient information that could have gone wrong. Here’s the point I want to make – there’s got to be a way of holding ourselves accountable absent of putting cops in jail for making mistakes.”

After waiting several months for Milwaukee County District Attorney John Chisholm to decide whether to charge Manney with a crime, Hamilton’s family decided to release his autopsy report on Monday. Chisholm claims his office is still awaiting the results of an FBI investigation and an independent investigation to determine if Manney violated Hamilton’s civil rights.

In a statement from the ACLU of Wisconsin, Executive Director Chris Ahmuty wrote, “To the extent that police department policies and practices contributed to an officer-involved fatal shooting, the MPD should change its policies and practices and not use the punishment of one or more officers to allow the MPD to escape its responsibilities. The ACLU of Wisconsin will monitor this case to determine what changes the MPD needs to make to eliminate excessive use of force incidents. We encourage the Fire and Police Commission and Common Council to review this decision and exercise their oversight function.”