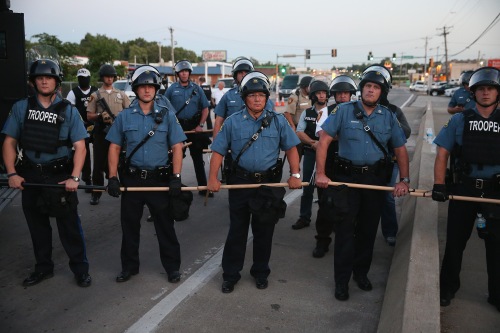 Originally published on March 12, 2015, at NationofChange.org

Ferguson Police Chief Thomas Jackson announced his resignation on Wednesday after a scathing Justice Department report revealed systemic racism throughout the government of Ferguson. Accused of racial discrimination and repeatedly violating civil rights, Chief Jackson has decided to step down along with the city manager, a municipal court judge, and two police officers who immediately resigned in the wake of the Justice Department’s investigation. Although the Department of Justice declined to file charges against Darren Wilson, their investigation exposed a culture of unlawfully targeting black people for profit and ridicule.

“It is with profound sadness that I am announcing I am stepping down from my position as chief of police for the city of Ferguson, Missouri. My resignation will be effective March 19, 2015 to provide for an orderly transition of command,” Chief Jackson wrote in his resignation letter. “I will continue to assist the city in any way I can in my capacity as a private citizen.”

According to the Justice Department report, the police in Ferguson disproportionately stopped, arrested, cited, and used force on black residents while exchanging racist emails between officers and court officials. After analyzing the Ferguson Police Department’s data on stops, searches, and arrests between 2012 and 2014, the DOJ discovered that blacks accounted for 85% of all traffic stops, 90% of citations received, and 93% of people arrested were black. 88% of the cases in which officers reported using force had been against black people, and all 15 people bitten by police dogs were black.

In order to generate revenue for the city, police officers engaged in contests to impose the highest number of unfair fines on black residents. According to Attorney General Eric Holder, officers regularly violated the First, Fourth, and 14th Amendments without consequence while charging black residents with unlawful allegations, including “manner of walking along roadway.”

“As detailed in our report, this investigation found a community that was deeply polarized, and where deep distrust and hostility often characterized interactions between police and area residents,” stated Attorney General Holder. “Our investigation showed that Ferguson police officers routinely violate the Fourth Amendment in stopping people without reasonable suspicion, arresting them without probable cause, and using unreasonable force against them. Now that our investigation has reached its conclusion, it is time for Ferguson’s leaders to take immediate, wholesale and structural corrective action. The report we have issued and the steps we have taken are only the beginning of a necessarily resource-intensive and inclusive process to promote reconciliation, to reduce and eliminate bias, and to bridge gaps and build understanding.”

Although the Justice Department declined to press charges against former Officer Darren Wilson for the death of Michael Brown, the DOJ’s report has established a pattern of systemic abuse and racism within the Ferguson Police Department. In September 2009, officers John Beaird, Christopher Pillarick, and Michael White charged Henry Davis with destruction of property for bleeding on their uniforms after viciously beating him over a case of mistaken identity. During the protests last August, police repeatedly violated journalists’ First Amendment rights by shooting them with rubber bullets and arresting them without charges.

Although the Ferguson Police Department and local government repeatedly violated civil rights, no one has been charged with any crimes.

As officers confronted protesters gathered outside the Ferguson Police Department last night, a St. Louis County officer and Webster Groves officer were shot. Witnesses reported hearing between two and four shots fired from a house on a hill across from the police station. The officers were taken to Barnes-Jewish Hospital and are expected to survive.