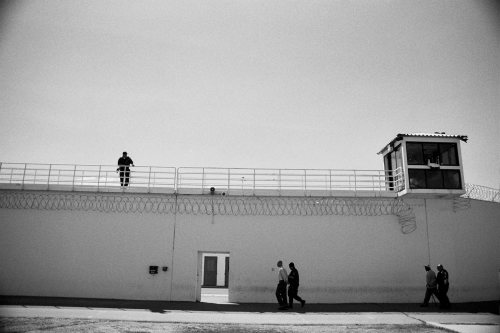 Originally published on March 21, 2015, at NationofChange.org

Four former corrections officers were sentenced to prison on Wednesday after pleading guilty to beating inmates and covering up multiple incidents of abuse. Altogether, eight corrections officers have been convicted of conspiracy and obstruction charges related to severe beatings within the Macon State Prison (MSP) in Oglethorpe, Georgia. Although the former prison guards admitted that they were following orders from their superiors, no commanding officers have been convicted of any charges.

According to court documents, Macon State Prison inmate Terrance Dean engaged in a verbal and physical altercation with an MSP corrections officer on December 16, 2010. Responding to the incident, Correctional Emergency Response Team (CERT) members Darren Douglass-Griffin, Willie Redden, Ronald Lach, Kerry Bolden, Delton Rushin, Derrick Wimbush, and CERT Sergeant Christopher Hall placed Dean in handcuffs before escorting him from the room. Instead of taking him to the medical unit, the CERT officers escorted Dean to a gymnasium without any surveillance cameras.

Although Dean had his hands cuffed behind his back and was not resisting, the CERT officers viciously beat him for several minutes until Dean lost consciousness on the floor. After the beating the CERT officers transported Dean to the medical unit, where he was diagnosed with gross deformity to the head, five-inch long hematoma to the head and temple, laceration to the mouth, and closed head trauma. Non-responsive to verbal commands, Dean was transferred to multiple hospitals and diagnosed with traumatic brain injury.

While Dean received medical treatment for his wounds, the CERT officers at Macon State Prison falsified their reports and covered up the abuse to justify their heinous actions. On December 14, 2012, Dean filed a civil rights lawsuit against the CERT members who brutally attacked him along with their commanding officers for encouraging prisoner abuse. Three months later, the Justice Department charged Redden with conspiracy to commit civil rights offenses. Redden immediately pleaded guilty.

CERT members Emmett McKenzie, Kadarius Thomas, Douglass-Griffin, and Bolden also pleaded guilty to conspiracy against rights, obstruction charges, and writing a false report regarding the beating of an inmate. The former corrections officers confessed to covering up several beatings of prison inmates inside the gymnasium to avoid surveillance cameras. The CERT members also implicated Captain Kevin Davis and Deputy Warden James Hinton for encouraging officers to abuse inmates and conceal their actions.

On December 4, 2014, a federal jury convicted former CERT officers Ronald Lach, Delton Rushin, and Sgt. Hall. Lach was sentenced to 90 months in prison for his involvement in the beating of the inmate, for conspiring to cover up the beating, and for writing a false report. Rushin got a 60-month prison sentence for conspiring to obstruct justice and obstruction-related offenses. Sgt. Hall received 72 months in prison for conspiracy to obstruct justice and two obstruction-related offenses. All three will have two years of supervised release.

Capt. Davis and Deputy Warden Hinton were never convicted for their alleged involvement in supporting and covering up prisoner abuse.

Former CERT member Willie Redden is the final defendant to be sentenced in connection with these cases. Redden’s sentencing date has not yet been set.

“Eight former corrections officials from Macon State Prison now stand convicted for their involvement in beating inmates or in the coordinated cover-ups that followed each assault,” stated Acting Assistant Attorney General Vanita Gupta for the Civil Rights Division. “These officers betrayed the public trust by using their official positions to commit violent civil rights abuses and then to try to hide what they had done. The Department of Justice will continue to vigorously prosecute corrections officers who use their power to violate federal law.”