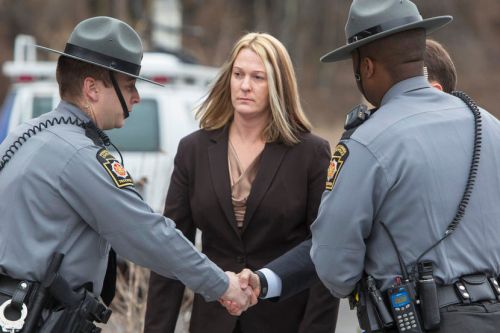 Originally published on March 26, 2015, at NationofChange.org

A Pennsylvania police officer was charged with criminal homicide on Tuesday for shooting an unarmed man in the back while he remained facedown on the ground. Although the unarmed man had been fleeing from a traffic stop over expired tags, the District Attorney admitted that the video from the officer’s Taser shows nothing in the victim’s hands when the officer shot him twice in the back. Accused of employing deadly force without justification, the officer has been released on bail and is under electronic monitoring.

Around 4pm on February 2, Hummelstown Police Officer Lisa Mearkle noticed a blue Saturn with expired inspection and emission stickers from last December. After Mearkle activated her patrol car’s lights and siren, 59-year-old David Kassick fled to his sister’s home where he had been living temporarily. Arriving at his sister’s residence, Kassick pulled the Saturn into the driveway, exited the vehicle, and ran towards the backyard. Mearkle parked her patrol car behind his vehicle and pursued Kassick on foot.

After closing the distance between them, Mearkle fired her Taser deploying probes into Kassick’s back. Kassick fell facedown onto the snow as Mearkle held the Taser in her left hand and drew her Glock .22 pistol in her right hand. After ordering Kassick to show his hands, Mearkle shot him again with her Taser. Momentarily unable to see Kassick’s left hand, Mearkle fired a bullet into his back.

Repeatedly ordering Kassick to show his hands, Mearkle waited four seconds before firing another bullet into his back. Mearkle then waited for back up officers to arrive before performing CPR on Kassick. At 4:45pm, Kassick was pronounced dead at the scene by the Dauphin County Coroner’s Office.

According to Dauphin County District Attorney Ed Marisco Jr., Kassick had a blood alcohol content of 0.021 and had been carrying drugs on him at the time of his death. Although a hypodermic needle was found at the scene, no weapons were recovered from Kassick’s body.

After reviewing Kassick’s autopsy report and the video recorded from Mearkle’s Taser, Marisco accused Mearkle of intentionally, knowingly, recklessly, or negligently causing Kassick’s death and charged her with criminal homicide on Tuesday. According to the video, Kassick had been lying facedown on his stomach when Mearkle fired the first bullet into his back. Although Mearkle claims that she thought Kassick had been reaching into his jacket for a gun, Marisco stated that the footage from her Taser shows Kassick attempting to remove the stun-gun probes in his back.

“At the time Officer Mearkle fires both rounds from her pistol, the video clearly depicts Kassick lying on the snow covered lawn with his face toward the ground,” asserted Pennsylvania State Police Lt. Jonathan Mays in the arrest affidavit. “Furthermore, at the time the rounds are fired nothing can be seen in either of Kassick’s hands, nor does he point or direct anything toward Officer Mearkle.”

During an interview with the Pennsylvania State Police on February 5, Mearkle admitted that Kassick had not been physically aggressive with her at any point during the incident and did not see him display anything that could be misconstrued as a weapon. A review of the investigation found that Mearkle employed deadly force without justification resulting in Kassick’s death. Released on bail, Mearkle remains under electronic monitoring. Her preliminary hearing has been set for April 20.

On Tuesday, the Borough of Hummelstown issued a press release affirming that the Hummelstown Borough and its Police Department have been fully cooperating with the use of force investigation.

“Nothing is going to bring my brother back. He should have never lost his life over a traffic stop,” declared Dale Kassick, David’s younger brother. “It’s not being swept under the rug, it’s not being forgotten about.”