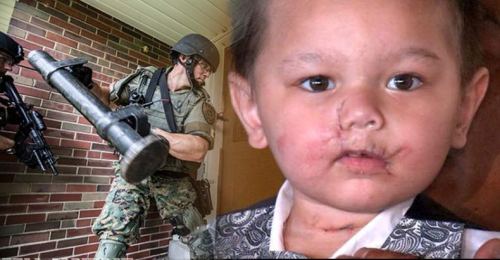 Originally published on July 23, 2015, at NationofChange.org

The former Habersham County sheriff’s deputy responsible for the botched drug raid that nearly killed an 18-month-old toddler was indicted by a federal grand jury on Wednesday for providing false evidence to obtain a “no-knock” search warrant. Instead of following procedures, former deputy Nikki Autry allegedly cut corners and provided false information, which resulted in a SWAT team raiding an innocent family’s house and tossing a flashbang grenade into the face of their young child. Although the county initially refused to pay the toddler’s medical expenses, officials eventually reached a settlement with the family after evidence emerged of Autry’s lies and the SWAT team’s negligence.

On the evening of May 27, 2014, Deputy Autry, who was also an agent of the Mountain Judicial Circuit’s drug unit, presented an affidavit to Judge James Butterworth falsely swearing that a trusted informant had recently purchased methamphetamine from a residence in Cornelia, Georgia. According to the indictment, Autry had used an unofficial and unreliable informant who never actually entered the residence or purchased any drugs from anyone inside the house. Based on Autry’s false information, Judge Butterworth issued a “no-knock” search warrant for the residence and an arrest warrant for the alleged drug dealer, Wanis Thonetheva.

After catching him stealing several valuables from her, Thonetheva’s mother had kicked him out of her house months earlier. When a fire destroyed her brother’s house in Wisconsin, she invited her brother, Bounkham Phonesavanh, his wife, Alecia, and their four young children to temporarily move in with her. Six weeks later, they found a new house in Wisconsin and were planning to return home when a SWAT team raided their bedroom in the middle of the night.

Around 2 a.m. on May 28, the SWAT team broke down their door as Habersham Deputy Charles Long threw a flashbang grenade into their bedroom. The grenade landed in the crib of 18-month-old Bounkham Phonesavanh Jr., blowing a hole through his chest and leaving third-degree burns along his face and torso. After slamming her husband to the floor, deputies ordered Alecia to sit down and shut up as she asked to hold her screaming child.

Instead of allowing Alecia to see her wounded son, Habersham Deputy Jason Stribling picked up the toddler, left the room, and waited outside for an ambulance. As the deputies detained the family and searched the house for drugs, Alecia and her husband discovered a pool of blood and burn marks in the crib. Their son’s pillow had been blown apart.

“I asked if he got hurt. And they said, ‘No, your son is fine. He has not sustained any serious injury,’” Alecia recalled. “They ended up telling us that he had lost a tooth.”

Hours later after failing to find any drugs in the house, deputies allowed Alecia and her family to drive to Grady Memorial Hospital in Atlanta. Her son was in the intensive burn unit and had been placed in a medically induced coma.

“His chest wall had torn down to muscle,” stated Dr. Walter Ingram, head of Grady’s burn trauma unit. “And it tore his face down to bone, down to his teeth.”

Suffering from severe burns and a collapsed lung, 18-month-old Bounkham Jr., affectionately referred to as “Bou Bou,” remained in the coma for over five weeks. His parents spent each night in the hospital not knowing if he would ever wake up again.

Suspected of dealing $50 worth of meth to Autry’s informant, Thonetheva was arrested hours later at a different residence without the necessity for a SWAT raid. While Bou Bou remained in a coma, deputy Autry resigned from the department. Judge Butterworth, who signed the no-knock warrant, announced his retirement. And four months after the raid, the drug task force responsible for Bou Bou’s injuries disbanded.

On June 24, 2014, Bou Bou was taken out of the medically induced coma and began rehabilitation. With doctors attempting to assess any lasting brain damage, Bou Bou endured several surgeries to repair his face and torso. Although the Phonesavanh family accumulated roughly $1 million in medical bills, Habersham County officials initially refused to compensate the family. Citing a state law that grants immunity from negligence claims against the county government, officials later paid the family a $964,000 settlement after investigating allegations that Autry provided false evidence and the SWAT team ignored multiple signs that children were present during the raid.

“Our criminal justice system depends upon our police officers’ sworn duty to present facts truthfully and accurately – there is no arrest that is worth selling out the integrity of our law enforcement officers,” stated Acting U.S. Attorney John Horn. “In this case, Autry is charged with making false statements to a judge in order to obtain search and arrest warrants. Without her false statements, there was no probable cause to search the premises for drugs or to make the arrest. And in this case, the consequences of the unlawful search were tragic.”