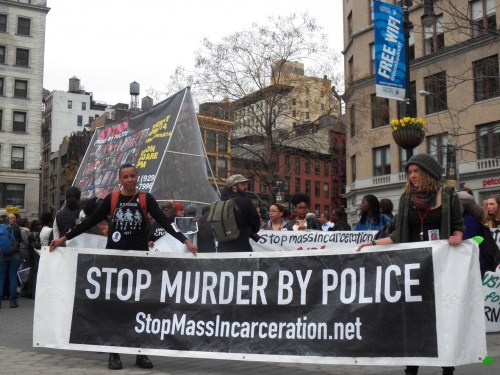 Originally published on July 29, 2015, at NationofChange.org

At least eleven people have been killed or found dead while in police custody this month. According to autopsy reports, their deaths have been ruled homicides, suicides, and in some cases remain medically inconclusive. Several investigative agencies have launched probes to determine whether any officers will face criminal charges for these deaths.

After engaging in a violent altercation with her ex-husband, Ralkina Jones, 37, was arrested on July 24 and taken to the Cleveland Heights City Jail in Ohio. Cleveland Heights Police Chief Jeffrey Robertson claims that Jones was being treated for several medical conditions and received her prescription medications as directed. But on the following day, a jail administrator noticed that Jones appeared lethargic and transferred her to a hospital.

Jones remained in the hospital for roughly three hours while receiving treatment for possible blood sugar and blood pressure conditions. At 10:40 p.m. on July 25, Jones returned to her jail cell with reportedly normal vital signs. The next morning, guards found her dead inside her cell. After performing her autopsy, the Cuyahoga County Medical Examiner found no suspicious injuries to Jones’ body but admitted that further studies were required to determine a cause of death.

Suspected of being involved in a burglary, Heriberto Godinez Jr., 24, was sweating heavily with labored breathing when Chicago police officers placed him under arrest on July 20. Although paramedics were called, Godinez reportedly became unresponsive and died. An autopsy was conducted but could not determine the cause of death. Informed that dash cam footage exists but has not been released, Godinez’s family has called for an independent federal investigation into his suspicious death.

While attending a rock concert in Southaven, Mississippi, Troy Goode, 30, allegedly took LSD before police arrested him for running in circles through a field on July 18. Video captured from a bystander shows Goode being hogtied with his face buried in the mattress of a stretcher and a strap over the back of his head to restrict movement. The officers ordered the witnesses to stop recording the incident and threatened to arrest Goode’s family if they attempted to visit him at the Baptist Memorial Hospital-DeSoto where he died two hours later.

Arrested for stealing a cell phone in Homewood, Alabama, Kindra Chapman, 18, was booked into the Homewood City Jail at 6:22 p.m. on July 14. Over an hour later, guards reportedly found her dead inside her cell hanging from a bed sheet. Although police claim that they have surveillance footage of Chapman taking her own life, they refuse to release the entire video to the public and did not attempt to stop her from committing suicide. The officers admittedly did not attempt to resuscitate her until returning another inmate from court to Chapman’s cell.

Arrested on July 9 for failing to pay a traffic fine, Rexdale Henry, 53, was taken to the Neshoba County Jail in Philadelphia, Mississippi. Five days later, on the same day as Chapman’s death, guards found Henry dead in his cell around 10 a.m. on July 14. Henry’s family has called for an independent autopsy, while the Mississippi Bureau of Investigation has launched a probe into the cause of his death.

Pulled over for making a lane change without signaling on July 10, Sandra Bland, 28, had a police Taser aimed at her face and was arrested for refusing to put out her cigarette. Booked in the Waller County Jail and charged with assaulting an officer, Bland was found dead three days later in her cell hanging from a metal hook with a plastic trashcan liner wrapped around her neck. Although Bland’s death has been ruled a suicide from self-inflicted asphyxiation, the FBI and Texas Rangers have launched investigations into the circumstances surrounding her death.

While riding in his horse-drawn buggy on July 8, Jonathan Sanders, 39, saw Stonewall police officer Kevin Herrington arguing with a man at a gas station. After asking Officer Herrington to stop bothering the man, Sanders continued on down the road as a witness reportedly heard Herrington direct a racial slur at Sanders. Following Sanders in his patrol car, Herrington turned on his police lights directly behind the buggy, which startled Sanders’ horse.

As his horse took off running, Sanders fell off the buggy and attempted to chase after his horse. Grabbing a headlamp tied around Sanders’ head, Herrington pulled the strap down to his neck and continued choking Sanders for twenty minutes. Although Herrington claims that he saw Sanders holding illegal drugs and had attempted to grab his gun during the struggle, witnesses assert that Sanders didn’t appear to have drugs on him and was not resisting arrest.

When Herrington finally released his chokehold, Sanders was unconscious with blood pouring out of his mouth. A preliminary autopsy report ruled his death a homicide by manual asphyxiation. With assistance from the FBI, the Mississippi Bureau of Investigation is looking into his death.

Arrested on a bond violation earlier this month, Sarah Lee Circle Bear, 24, was taken to the Brown County Jail in Aberdeen, South Dakota. Although Circle Bear reportedly pleaded to her guards that she was suffering excruciating pain, the guards ignored her cries for help and told her to quit faking. On July 5, she was found unconscious and not breathing in her holding cell. Circle Bear was transported to a local hospital and died later that day. Brown County coroner Mike Carlsen found the results of her autopsy inconclusive.

In less than two weeks, three people have died in police custody in Houston, Texas. On July 26, a 29-year-old woman charged with public intoxication was found unresponsive and transported to Ben Taub General Hospital where she was declared dead. On July 23, a 38-year-old inmate in a downtown Houston jail cell allegedly hung himself with his pants. And on July 18, a 42-year-old man walked into a Houston convenience store and allegedly attacked several officers before suddenly becoming nonresponsive. He was taken to a hospital where he was declared dead. Law enforcement officials refuse to release the identities of these three victims who died in police custody.