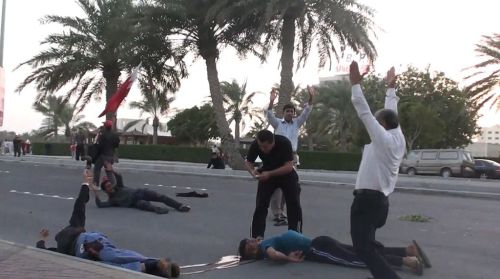 Published on September 3, 2014, at ForceChange.com

Since the Arab Spring uprisings, Bahrain security forces have killed dozens of activists and wounded hundreds of others. Indiscriminately gunning down and viciously beating protesters, the police cover up their crimes and rarely face prosecution. Many of those arrested are subjected to torture and horrific threats to their families. Arrested children receive the same mistreatment. The government of Bahrain must investigate these human rights abuses and punish the cops committing these crimes.

During protests, police in riot gear have repeatedly killed and crippled activists by shooting them with birdshot. In one case, Mahmood al-Jazeeri was killed when a cop fired a tear gas canister at his head at close range. According to the U.S. State Department, an eight-year-old child reportedly died from inhaling tear gas dispersed by the police.

END_OF_DOCUMENT_TOKEN_TO_BE_REPLACED

Originally published on August 27, 2014, at ForceChange.com

Goal: Stop the human rights abuses committed by the police and other security forces in Angola

Government officials are allowing arbitrary arrests, torture, and unlawful killings of civilians by the police. Activists are arrested for attending protests even though their constitution protects the right to assemble. With a lack of due process, suspects often face potentially life-threatening prison conditions and corrupt corrections officers. The Angolan government must root out these criminal cops to prevent further abuses against their people.

According to the U.S. State Department, widespread government corruption is responsible for the proliferation of dirty cops patrolling the streets. Two police officers reportedly shot a man twice in the head for confronting them after they had severely beaten his friend. Police regularly arrest activists without charges and utilize excessive force in order to intimidate protesters. The murders of political opponents are rarely investigated, allowing many assassins to walk free.

END_OF_DOCUMENT_TOKEN_TO_BE_REPLACED

Originally published on August 17, 2014, at ForceChange.com

Investigations reveal multiple cases of Albanian police officers using excessive force and often beating suspects during interrogations to elicit confessions. Albanian jails are reported to be in such poor condition as to constitute inhuman treatment. Reports of torture committed by prison guards are rarely investigated, while the courts rarely prosecute corrupt government officials.

According to the U.S. State Department, corruption in all branches of the Albanian government is pervasive. With a mountain of evidence against them, high profile government officials are often found not guilty in court. Many other corrupt officials never have charges brought up against them.

END_OF_DOCUMENT_TOKEN_TO_BE_REPLACED

Originally published on August 14, 2014, at ForceChange.com

The government of Yemen has become complicit with human rights abuses taking place by law enforcement officials. Ignoring reports of arbitrary arrests, torture, and illegal executions, the government of Yemen refuses to investigate the perpetrators of these crimes. Such widespread corruption will only lead to further abuses if nobody takes action now.

END_OF_DOCUMENT_TOKEN_TO_BE_REPLACED 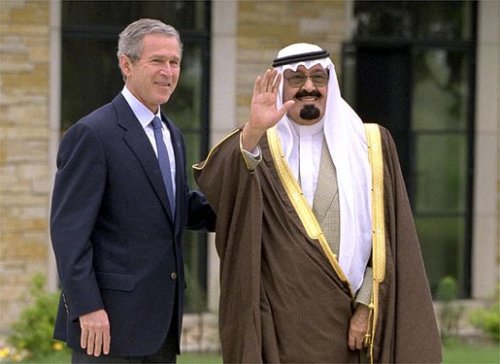 Originally published on August 13, 2014, at ForceChange.com

Although the law prohibits the use of torture, many prisoners in Saudi Arabia are regularly beaten and humiliated by their jailors. Imposing degrading punishments on their prisoners, government officials in Saudi Arabia consistently break both Sharia law and statutory law by continuing these practices well into the 21st century. Instead of falsely claiming that inflicting torture prevents terrorist attacks, government officials simply torture prisoners to flaunt their abusive power.

According to the U.S. State Department, the Saudi Arabian government is guilty of kidnapping, torture, human trafficking, illegally detaining citizens without charges, and murder. By regularly committing human rights abuses against its own people, the Saudi Arabian government exerts its power through absolute fear and intimidation. Human rights activists are often secretly arrested without committing a crime, and then are imprisoned and tortured.

END_OF_DOCUMENT_TOKEN_TO_BE_REPLACED

In this video Cassandra Rules questions Lynne and Dick Cheney at a recent rare public event in Los Angeles California. Cassandra asked why whistleblowers like John Kiriakou are in jail for exposing illegal activity while Dick Cheney the person who committed the illegal acts is still free. As you can see in the video Dick Cheney sat silent as his wife Lynne did all the talking. She also mentions Edward Snowden and calls him a traitor. Special thanks to WeAreChange camera man Andrew Emett for filming. 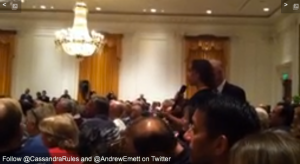 Originally published on May 21, 2014, at popularresistance.org

In this video Cassandra Rules questions Lynne and Dick Cheney at a recent rare public event in Los Angeles California. Cassandra asked why whistleblowers like John Kiriakou are in jail for exposing illegal activity while Dick Cheney, the person who committed the illegal acts is still free. As you can see in the video Dick Cheney sat silent as his wife Lynne did all the talking. She also mentions Edward Snowden and calls him a traitor. Special thanks to WeAreChange camera man Andrew Emett for filming. 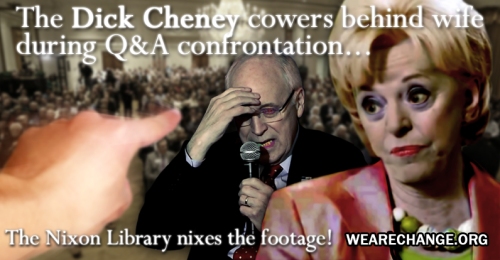 Originally published on May 27, 2014, at WeAreChange.org

The perfect trifecta when confronting a known war criminal on his turf.

After crawling through traffic, I finally arrived at the Nixon Presidential Library. Historically notorious for omitting facts and attempting to whitewash the Watergate scandal, this mausoleum stood upon unholy ground.

I texted Cassandra and met her in the parking lot. She was pissed.

END_OF_DOCUMENT_TOKEN_TO_BE_REPLACED

Originally published by Cassandra Rules on May 26, 2014, at firedoglake.com

On May 19th, I attended a lecture and book-signing event, featuring former Vice President, Dick Cheney, and his wife, Lynne, at the Nixon Library in Yorba Linda, CA. The pair were present to promote Lynne’s new book, James Madison: A Life Reconsidered. A friend had sent me an event listing from Code Pink who was calling for Dick’s symbolic citizens arrest (there wasn’t one, unfortunately). I immediately bought a ticket and started trying to figure out what to wear to hide my tattoos so I could blend in. I was especially concerned about the drunken peace sign on my leg, since we know how these people feel about peace.

END_OF_DOCUMENT_TOKEN_TO_BE_REPLACED

Originally published on May 21, 2014, by Gabriel San Roman at OCWeekly.com

Former Vice President (President?) Dick Cheney and his wife Lynne thought they were on safe grounds Monday evening in Yorba Linda as they appeared together for a book event. Lynne, the pendeja who once infamously complained there wasn’t enough white men highlighted in U.S. history standards for children, authored James Madison: A Life Reconsidered about the nation’s fourth president. Protesters gathered outside the Nixon library. All went well for the Cheneys inside until Cassandra Fairbanks took her turn at the microphone.